Indie publishing, Russian roulette, and one night stands ... One blog post to link them all


Ready for the ride?

I've been writing, on and off, and through a lot of different novels, since I was fourteen, when I found that writing about extra-planetary battlefields was much more rewarding than paying attention in class.

Up until last week, I wrote mostly for myself, and for friends incautious enough to volunteer to read whatever was fizzing out of my brain and onto the keyboard. I occasionally sent bits of it to publishers and agents. This last pastime, however, pretty much went by the board once I started working full-time.

It's like looking for a job. Employers (read: publishers) aren't interested in taking a risk on you when you haven't demonstrated any ability to sell books in large numbers. If you want to sell books in large numbers, you need a publisher. Once you've looked at this Catch 22 a few times, turned it upside-down, and looked at it a bit more, you can look at the alternatives. One of them is an agent.

Let's examine agents for a moment. Like publishers, they make their money when you sell books. A lot of books. Like publishers, they want a solid gold prospect. See the preceding paragraph. Also, agent desires vary. You can spend a lot of time putting together a 500 (or 300, or 1,000) word synopsis of your work, in 11.5 pt Times New font, 1.15 spaced, single-sided, or in Garamond 10 pt, double-spaced with a 2.5 cm margin, and then adding the first five, or three, or first, second and tenth chapters, to be submitted by email only, or mail only on letter paper, or only PDF files to a maximum size of 2MB considered.

Basically, 99.999% manuscripts will be rejected in the order in which they are received. Even J K Rowlings had to go through this process about 50 times. If you have the time, patience, and stamina for it, you may manage to land an agent, who then has to try and push your MS to a publisher for you.


Not being a patient person, and having a series of jobs that entail leaving my house before 0700 and often getting back about 1800, my efforts at getting my books into the traditional publishing system came to a crashing halt.

It finally dawned on me over the past few years that my fun really comes in writing the books. Ergo, anything else could (and should) be viewed as a bonus. Also, that while I still find there's no substitute for a real, paper book, I now have a sizeable e-library.

I started talking to friends and colleagues, and a few people who are both, and reading a lot of the invaluable material that people put up on Twitter about their experiences as editors, authors, and publishers of every variety on Twitter, and I realised that for a bit of work and an affordable amount of money, I could publish my own book.

Now, when I started writing, in 1995, when the World Wide Web was still a distant curiosity with a load time of five minutes per page, self-publishing was pretty much exactly the equivalent of spinning the cylinder, pointing the barrel at your temple and pulling the trigger. You might survive as a serious author, but your chances weren't worth betting on. Also, because books were printed (see above, re early Stone Age), it cost several grand up front to have a press 'self-publish' you.

Now it's as easy as assembling 75,000 plus words, a good-looking cover, and signing up on Amazon, or Kobo (or Smashwords, or Google Play, or any other platform that you like the look of). Of course, as far as traditional publishing goes, if you go indie and your book fails to sell n copies in its first 72 hours, you've probably still pulled the trigger on a loaded chamber. But it's affordable, it makes your work available to that minority that seriously wants to read it, and it's fun.

Think of it as a one-night stand rather than a marriage. It's fun, you can do whatever the hell you want, and there's no one telling you afterwards that you can't dance naked in your living room if you want to.

Not to mention, writing plus publishing equals author. Everyone knows that. Sometimes, around 50 Shades of Grey movie release season, you might wish you didn't, but see above. Going indie seems to me to be pretty much the epitomy of Voltaire's summary: "I disagree with what you say, but I will defend to the death your right to say it."

So, if you feel like a one-night stand (or a longer relationship, depending on your reading speed), come and check me out at jcsteelauthor.com, or on Goodreads. 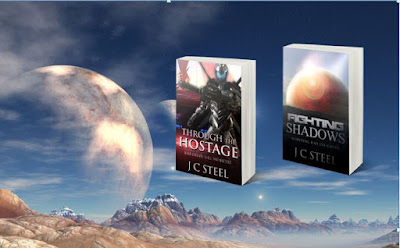