The centre of the madness, the eye of the storm ... where the Cortii series is written, edited, and not infrequently sworn about. 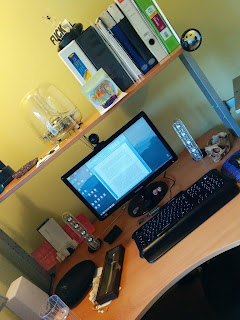 Almost out of shot to the right, there is a cat shelf. It's a cat shelf because we are what we most frequently do (~Aristotle), and what that shelf most frequently does is serve as a depository for furry, mobile writer's blocks. While their preferred spot is, of course, front and centre between me and the screen (and preferably on the keyboard), the shelf is an acceptable staging point for a rather miffed wash before staging another assault on the walls of my concentration.

Other important aspects are the skull, used for conjuring lost files (yes, it's a USB hub), the speakers, and not least, the remote-controlled flying fuck helicopter (because I can give one occasionally, but frequently need to provide photographic evidence).

Along the top shelf are the ring binders holding old manuscripts (otherwise known as editing inspiration - I look at these relics and immediately feel better about my current writing), and my rear-view mirror, currently completely useless because no one can sneak up behind me unless they can walk through walls. However, it's a great idea and I like it, which is why it's there.

Aside from the computer itself, the huge, sound-deadening headphones are a vital component of writing or editing. With those on and the metal playing, the only things that can distract me is a strategically-applied claw to my rear or the inevitable passage of tea through my system. 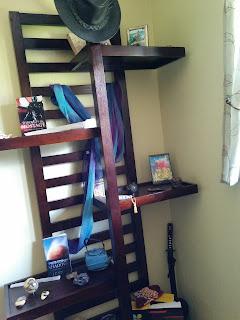 Because 3-D cameras are a cool idea but I don't have one, I've included the view facing in exactly the opposite direction. This is the display of other assorted detritus that I like to play with and think about when I'm procrastinating, which includes a wakizashi, shells from the Caribbean, a Japanese teapot (when not in use), proof copies of Through the Hostage and Fighting Shadows, a lot of sealing wax, and my Australian hat. Oh, and a bunch of assorted books on writing, WordPress, meditation, etc. that I like to have handy but that don't really fit in the library downstairs (because we've got somewhere between 1,000 and 2,000 books down there already and we need to buy a new shelf. Or three.)

I'm considering adding a warning sign on the door for when I'm working. Feel free to send suggestions.
Posted by Fuck you at 12:07