I figured I would sit down each week and try to write a post about a story idea. Am I going to write 52 new books? Hell no. What I'm hoping is that it'll be fun, other people may get a spark from some of them, and that it'll get me thinking of something other than my usual rut.

And hey, if my attempts to get book four in the Cortii series edited and beautiful and inspiring continues to hit the skids, I may take one of my ideas and run with it to give myself a break. My brain feels like a sponge that's been left out in the Sahara at midday right now.


When the stone breaks, a flower will rise (Get Inspired, week 1) 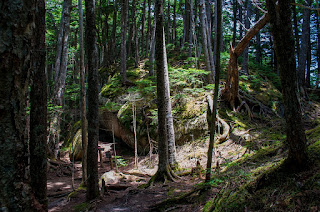 Amaranthe's been dreaming. When you're a French teenager living in a village so small they turn the streetlights out at midnight and the nearest cinema is ten kilometres away, there isn't much else to do, but these dreams are odd. They feel too real, and they're all set in her tiny village, at a time when the time-worn stones of the old church are sharp and pale and new.

Amaranthe dreams as Pierre, at a time when Petromantalum, the place where the roads meet, was the largest settlement in the area. The small church built by holy men twenty years ago has attracted the attention of one of the old gods, woken by the Christian bells and the smell of blasphemy, and from the mountains and the forest, the rivers and the standing stones, the ancient magic is rising.

Old and young, healthy and sick are dying between one breath and the next, and the echoes of their passing murmur in men's minds, driving those left to the ragged edge of sanity. The men of the Eastern cult do nothing but pray to their singular god and call the deaths His punishment for sin.

The son of a legionary and local woman, Pierre is a misfit, caught between two worlds. A generation ago, he would have joined the Legions. Now, with the might of Rome fading back into the East, there is only one way he can fight; with his mother's weapons, and the magic bequeathed to him as her son. No man is a match for the power of a god, but Pierre's sacrifice buys sanctuary for the village at the crossroads for nearly two thousand years.


So...where did this idea come from?

I had a dream about, more or less, this story a few months back, and it's been bugging me ever since. I'm unlikely to ever write it; it's long step diagonally from the type of story I usually write, but the dream was so vivid I could see the carving on the roof beams and feel the rough linen of the clothes. I figured it would make a good opening for the 'Get inspired' posts.
Posted by Fuck you at 14:55