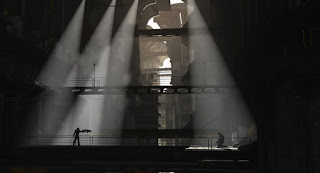 The akrushkari come up a lot in the books based on the Cortiian Base. They're the Councils' enforcers, bodyguards, and most of the rank and file of the Cortii know almost nothing about them beyond their function. Think of them as military police with a tendency to shoot first and ask questions never.

The word comes from old Cortiian, based on krushkar, or slave - one without free will. You'll see the 'a' prefix in a lot of Cortiian words as well, like 'asra', 'as’sri’atan’si' - it's a submission prefix, an acquiescence.

So essentially 'akrushkar' means a slave obedient to orders. In this case, to the Councils that command the Cortii, who make a lot of despots look like underachievers. Because an akrushkar acts under the direct orders of the Councils, or, under a very limited set of circumstances, a Cortiora, they're essentially untouchable - raising a hand to an akrushkar is defying the Councils, and the fact that their personal bodyguards are called slaves should give you an idea of the Councils' views on disobedience.

To understand the akrushkari a little better, let's take a side-trip and examine the Councils for moment. Two levels to this structure: Inner Council, all five of them, and Outer Council, traditionally twenty. Outer Council numbers, unlike Inner, can vary, although it's rare. You'll note the Cortiian preference for fives running right through the command structure.

If you're on the ball, you'll already have realised that new Council members, or magaii, must come from somewhere. The Councils recruit from the top units on their Bases; Cortii who've reached Blue rank or higher, and the Councils are only open, by invitation, to Cortiorai.

So if a Cortiora accepts a place on the Outer Council, what happens to their command? There are a lot of rumours on Cortiian Bases, but the information isn't made common knowledge, and new appointments to Council happen so rarely that most Cortiians simply don't know.

However, the answer is simple and very practical: the Councils can't risk having high-calibre mercenaries roaming around loose with a powerful link to a magai.

Some are offered the honour of a place among the akrushkari, and undergo intense telepathic conditioning as well as memory blocks. Others end up as fodder for the Councils' experimental labs. A very few of the really lucky ones are assigned as solo agents somewhere that their Base needs long-term eyes. Some wind up as Instructors, also after having their memories edited. It ensures that no magai has ties to a serving unit, and that no Cortiian likely to ever spend time on Base again has any potential hold on a magai.

What happens to the Cortiora who accepts a place on Council, of course, is something only known to the Councils. No one has ever successfully infiltrated the Councils.