So, what constitutes weapons in the Cortii? 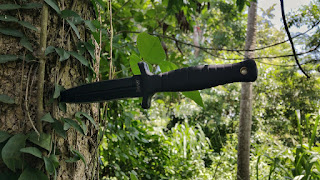 Personal loadout, for some reasons I hope will be obvious, isn't usually made public. No one who survives Cortiian basic training underestimates the value of surprise in a fight. However, there are some standard items. Uniform regulations dictate a hand laser and a stunner on the belt; every Cortiian in an active unit will carry them, in addition to anything else.

A laser is a distance weapon

The regulation-issue hand laser is a Cortiian model, and the grip doubles as a basic ID system; no one who isn't Cortiian can take the weapon and use it. That safety feature isn't a lot of use on a Cortiian Base, but off one, it's worth having. The weapon weighs about 500 grams, most of which is the power pack housed in the grip. The power pack is good for thirty single shots under normal conditions, and can be recharged from heat, which is convenient for a belt weapon.

It can be used as a cutting tool, but only gives about five seconds' worth; enough for a field amputation or to make basic door security seriously unhappy. It's fairly short-range (shooting anything much further away than ten metres with it will lose you power and accuracy). For anything between zero and five metres, and not wearing a personal shield, it's accurate and lethal. Current models, and anything issued in the last couple of decades, are shaped to be fired via a stud at the top of the grip that you depress with the thumb.

You can't stun with a laser

Contrary to popular belief, you can't recalibrate a coherent beam of light to stun. For occasions where prisoners are needed, deriani also carry a stunner. Again, the most common models are Cortiian-issue, and the exact specifications aren't available, but effectively, they use sonics as a short-term, short-range knockout.

The Cortiian models are more powerful than similar weapons in human space, mostly because Cortiians are both tricky and hard to put down. Turned on a standard human type, a Cortiian stunner will cause unconsciousness on the close range of an hour, and leave the target disoriented for some time after that. It will also quite possibly cause nerve damage, and it will almost certainly do damage to the bones of the ear. Turned against a Cortiian, half an hour's unconsciousness is about the best you can hope for, and an indirect shot or long distance will be result in less. The closer you are to your target when you set it off, the more likely it is to result in disorientation. Five metres is about the stunner's best effective range; slightly less in thin atmosphere, slightly more in denser environments.

Up close and personal

Because lasers can be disrupted by any of a range of personal shielding devices, most Cortiians also carry edged weapons.

Fighting knives of various designs are common, as are throwing knives. Longer blades are used, but less commonly, as they become increasingly hard to hide. Most deriani lean towards a dull finish, and dark alloys on their blades. By far the most common preference is for double-edged blades, but beyond that there are a number of options. A personal shield will not stop a blade; they move too slowly and the approach is wrong. You can expect any Cortiian to be a proficient knife-fighter; the majority will also be good with longer blades. The Cortii are fairly equally divided on the topic of custom blades; the main argument for is that they're harder for someone else to turn against you, and the main argument against is that if you become too used to fighting with a custom design, you become less accustomed to using a knife you can take from anyone else or a standard dispenser.

Some deriani also carry blunt weapons; mostly these tend to be pocket-sized, as, again, a full-length staff tends to be noticed. As staves of various sizes are both common and easy to fabricate, however, expect most Cortiians to be able to use a staff weapon. On a Base, the most common variants tend to be worn across the knuckles, or a weighted or telescoping cosh of some kind. Variations on two heavy weights with a thin filament connecting them are also common; if the weights aren't getting the job done, there's always the chance of garroting your opponent.

Every Cortiian will be proficient in empty-hand fighting. In this area, variation is key, and the more obscure the fighting style, the more likely you are to be able to come at an opponent in a way they don't expect and will have to invent wildly to counter. If there can be said to be a common hobby in the Cortii, hand-to-hand is probably it. It will be practised daily as part of any deriani exercise routine, and most people will have at least two styles that they're expert in, as well as a basic understanding of as many others as they can. It's one of the areas where real-world experience is invaluable, because a holosuit can only throw up combinations that already exist in its programming.

There are no rules

The Councils have no interest in intervening in casual violence. The Councils will step in only if the situation looks likely to cause expensive damage; anything else simply saves them the trouble of weeding out the unmotivated, the unintelligent, and the unskilled.
Posted by Fuck you at 15:31