What is etymology, and why are you excavating it?

Etymology is like the archeology of a language (definition: the study of the origin of words and the way in which their meanings have changed throughout history).

In this series of posts, we're going to look at some of the English phrases, like 'at full tilt', 'toe the line', 'when push comes to shove' that are commonly used, and have an interesting history - and that people often get wrong.

Well, I haven't done an etymology excavation in quite some time, and it occurred to me that now would be a good time, because I recently found out where the word 'fascinating' comes from...or at least, I think I have, and it's epic.

So why 'fascinating'? Usually I look at phrases, where they come from, how they could be adapted to fiction, how they often get misused...well, I reckon actually that you may be misusing 'fascinating' without even knowing it.

Fascinate is originally from the Latin half of the English language, from fascinare. Feel free to run that through a few web searches, but originally to bewitch (or to hex, curse), to irresistibly attract, and also to deceive or to obfuscate (hide). You can see how that set of meanings vaguely relate to each other.

So that's what the origin word meant, and how it got used down through today, when it's used pretty much interchangeably with 'interesting'.

However, I put it to you that fascinate shouldn't actually be used as a conversation-stopper when whats-his-face will not STFU about whatever...fascinate deserves much better than that, and here's why: I feel there is a solid argument to be made that fascinate, and fascinare, come from the name of an ancient Roman deity, Fascinus. 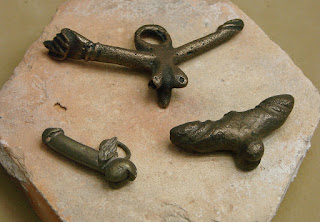 If you're thinking that a fascinum amulet looks startlingly akin to a donger with wings on, well, you aren't wrong. Ancient Romans, eh. Very similar to modern culture in so, so many ways...

But long story short, unless whatever you're saying is fascinating is at least as good as a flying penis that wards off the evil eye, you're probably using it wrong and blaspheming to boot.
Posted by Fuck you at 07:30