How do I get started writing?

Get started writing - how? 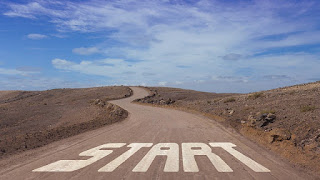 Every writers' forum I've spent time in has had someone, sometime, show up asking 'how do I get started writing?' At this point I always find myself needing to take my hands off my keys and wrestle down a sarcastic response like 'Start typing'.

After a few months of feeling vaguely guilty every time the situation occurred, it came to me that while the question that kept triggering my sarcasm reflex was a dumb one, there were possibly a few underlying questions more worth offering time to.

Ignoring the fact that some people really do show up on forums and ask stupid questions simply for attention, writing a book can be overwhelming. Here are some thinking points to make it more overwhelming.

If I were to write a 101 Guide to Getting Started Writing, some twenty years of fiction writing later, I'd have to say that there are a few vital ingredients that need to be tossed in the pot if you hope to make the magic happen.


What genre should I write?

Doesn't matter, it's not catching.

If you have a good story to tell, it doesn't matter if it's about terraforming Mars or a half-siren 'acquisitions specialist' being paid to acquire the Peaches of Immortality. Good story-telling never goes out of style. On the topic of trying to follow writing 'fads', check out 'Writing Myths: slay the dragon'.

If you want to know more about genres of writing, I suggest you pull up a search engine and dig in. Wikipedia is always a good place to start. If someone's harassing you to come out of the writing closet as a certain genre, I suggest smiling sweetly and telling them that you aspire to be original.


But which writing house will the Sorting Hat put me in?

Writers tend to gravitate to one end or other of a spectrum that ranges from 'pantser' at one end to 'plotter' at the other. Read on to discover which school of writing wizardry best suits you.

To avoid any embarrassing misconceptions, it may be important to note at this point that 'pantser' in this context refers to one who flies by the seat of their pants. It does not necessarily relate to their state of dress or undress whilst engaged in the practice of writing.


You may be a pantser if you have voices in your head, a setting, and no idea in the world how it's all going to end, but you can't stop thinking about it and you've already had detention for drawing spaceships in class.

You may be a plotter if you have a ton of post-it notes arranged in careful patterns on your wall, detailing the main idea, the sub-ideas, the plot arc, the chapter beats, the sub-arcs (with the kinky bits inserted on the hot pink notes) and have a file on your protagonist detailed down to their first word and the exact position of the mole on their arse.

Which is best? That's the great thing - there is no 'best'. There's the approach that works for you, and the others, which don't. Most people fall somewhere in between.


Give me facts! I cannot make bricks without clay!

The fact is that the amount of actual money to be made from writing hit rock bottom about a decade ago and then started burrowing. Think I'm kidding? These guys did the math: The Authors' Guild - The Wages of Writing.

Additionally, traditional publishing houses are taking on fewer and fewer new authors, while trumpeting ever louder that independent authors, or 'indies' are the leeches on the underbelly of professional writing. Therefore, starting to write books with the idea that fame and fortune await is delusional, so you'd better have another reason for doing it (see the heaping teaspoon requirement).

If those facts haven't put you off, then at least you've got the dash of crazy. Congratulations (...I think).


So how will I know if I'm doing it right?

Assassin: "Where other men blindly follow the truth, remember..."

Initiate: "Nothing is true."

Assassin: "Where other men are limited by morality or law, remember..."

Initiate: "Everything is permitted."


This quote is particularly applicable to writing. The way I do it won't be the way you do it. The way J. K. Rowling does it will be different from both of us. None of the three of us is 'wrong'. Some people use a pencil, others touch-type at 100 WPM, others again dictate to voice conversion software.

Write whatever way blows your skirt up. There is no set of commandments. The only restrictions are your imagination and your writing ability.
Posted by Fuck you at 14:02