What is etymology, and why are you excavating it?

Etymology is like the archeology of a language (definition: the study of the origin of words and the way in which their meanings have changed throughout history).

In this series of posts, we're going to look at some of the English phrases, like 'at full tilt', 'toe the line', 'when push comes to shove' that are commonly used, and have an interesting history - and that people often get wrong.

Seems as if once you start a good thing, the ideas just keep rolling. Today's excavation concerns the word 'quixotic'.

It's a fun dig. Let's start off with the dictionary definition as used today, courtesy of the Cambridge English Dictionary: 'having or showing ideas that are different and unusual but not practical or likely to succeed'. 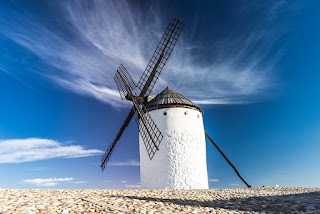 The origin of the term dates back to 1605, and the work of fiction written by Don Miguel de Cervantes, El Ingenioso Hidalgo Don Quijote de la Mancha. It's more commonly known in English as Don Quixote. It's a pretty lengthy story, but the basic idea concerns a nobleman (you guessed it, Don Quixote) whose brain has slipped a few vital gears and who thinks he's a knight in the chivalric tradition. Amongst his antics are included tilting at windmills, which he mistook for giants.

As a point of general trivia, he names his long-suffering horse 'Rocinante', also the name given to the Mars ship used by James Holden and his crew in the TV series 'The Expanse'.

Quixotic, and quixotically, are words which I feel deserve more use than they get. They also have a wide range of definitions; I used the Cambridge one as it sums it up well, but the word can be applied for anything from 'odd' to 'quirky' to 'flaky' (in the sense of someone not to be relied on).
Posted by Fuck you at 12:30